It’s day 5 of the #WilliamsWeek, a celebration of composer John Williams on the occasion of his 88th birthday coming tomorrow February 8. We continue to tribute the work of the Maestro through inspiring quotes taken from interviews and a piece of music from his extensive body of work for films and the concert hall. 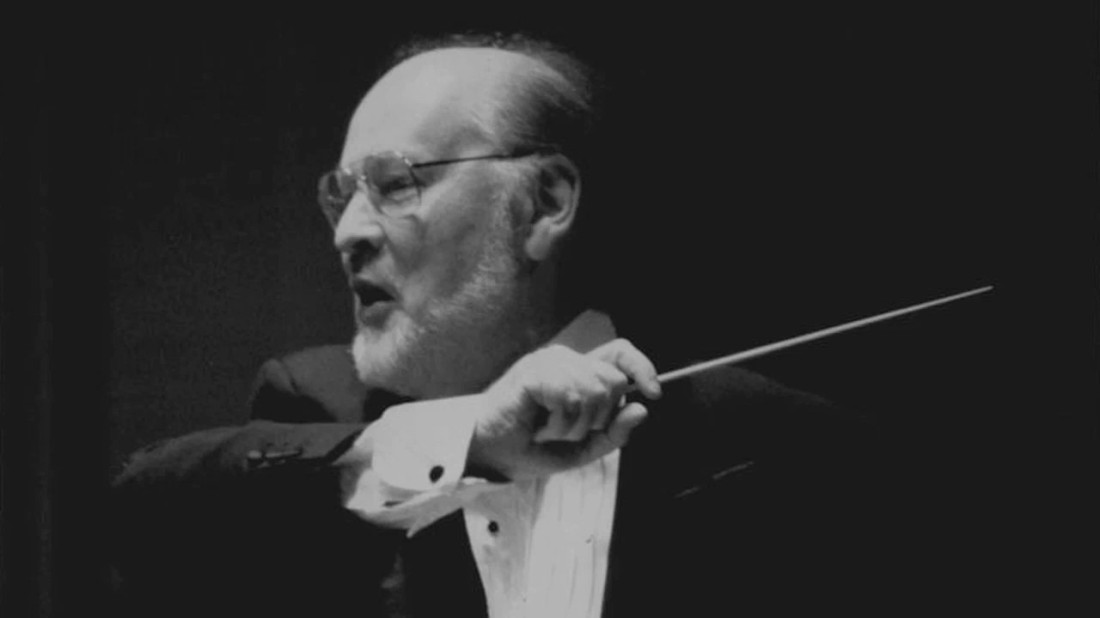 The whole body of what I’ve been doing is still to me a very organic thing. It’s a process that’s going on and nothing really seems fixed to me. I’m fixed on what’s on my desk and what is in front of me. […] I think it’s probably better to let others judge the quality or the effectiveness of this or that score, if it has any at all.

We are living in a world where we’re standing on shoulders that are unmatchable, especially in music. I mean the masters that have lived before are almost unapproachable in their inspiration and their technique. So we just have to work harder and contribute what we can.

The lesson I would probably offer anyone is to not call themselves a film composer but to call themselves a composer, and to compose for the theater, compose for film, compose for the church or the synagogue or educational music or instrumental, choral, secular, or religious music. Whatever they do; the ballet, and the theater certainly. Film is one thing that we do, and it’s good for young composers to know how to do that and desire to do it and find work doing it if they can.

But I think they should think of themselves in a broader sense because film music is restricting in many ways. You’re subjugating yourself to a soundtrack filled with sound effects and dialogue and other things that are in many ways equally important. Most of the great composers in history also have been great performers. So I think attending as many performances as one can is important. If one can play or sing, one should play and sing. If one can conduct, one should do that also. I guess that would be my singular first step in trying to advise anyone.

Life is so quixotic. I never would’ve imagined that I’d have the opportunities I’ve had. And young people can’t possibly imagine how far and how high their efforts can reach. All they can do is continue to work as hard as they can, learn as much as they can and not stop working. The process is the process. The joy of it is doing the thing itself.

(Quote from A Conversation with John Williams, Juliet Simon, BMI.com, 2015)

The piece chosen for today’s WilliamsWeek celebration is the concert version of the main theme from Born On The Fourth of July, the 1989 film directed by Oliver Stone and starring Tom Cruise based on the memoirs of Vietnam War veteran Ron Kovic, a former US Marine sergeant who remained seriously injured during the war and then turned into an anti-war activist after he returned home. It marked the first of the three collaborations between Williams and the Oscar-winning director, who back then was still reeling from the critical and commercial success of his previous Vietnam war film Platoon (1986). Born On The Fourth of July is a very strong, harsh drama, characterized by a powerful performance by Cruise in the role of Kovic, very graphic war sequences and an emotionally relentless style, both in the brilliant camerawork by Robert Richardson and in the editing by David Brenner and Joe Hutshing.

Composer John Williams agreed to score the film after seeing a rough cut and immediately heard in his mind the kind of music the film needed:

“It is an important, painful, serious and vivid film. I knew immediately I would want a string orchestra to sing in opposition to all the realism on the screen, and then the idea came to have a solo trumpet — not a military trumpet, but an American trumpet, to recall the happy youth of this boy.”

The first act of the film shows indeed the happy, suburbia-tinged youth of Ron Kovic and Williams accompanies this part of the film with enveloping Americana-inspired melodies for strings and solo trumpet, which becomes the musical voice of the main character. The composer has often taken the opportunity offered by the films he worked on to write extensive solo parts for specific instruments in concertante-type of style. In this case, the choice of solo trumpet becomes the true emotional focal point of the score, and perhaps of the film itself, also thanks to Tim Morrison’s eloquent playing and vibrant sound. The soloist, who was then Principal Trumpet of the Boston Pops, was Williams’s first choice when he settled on this instrument as the main character of the score:

“I knew I wanted Tim — he has an American sound and his playing is very touching, very beautiful. There is real serenity in his playing; Tim’s a thoughtful guy. [He] soars in it from the beginning right through. His playing has that special glow.”

The score marked also the first of the many film projects Williams and Morrison worked on together — the trumpet player would later become the solo voice also in JFK (1991), Nixon (1995), Amistad (1997) and Saving Private Ryan (1998). Morrison also was soloist on the recording of Williams’s “Summon the Heroes”, the official theme of the 1996 Olympic Games held in Atlanta.

Williams builds the score around a series of thematic ideas written mostly for a very expressive string orchestra and solo trumpet, augmented by woodwinds and brass. The composer isn’t afraid to let the strings ring with a powerful, opulent sound rich with vibrato. Some gestures may remind of Samuel Barber’s indelible Adagio for Strings (a piece already used by Oliver Stone in one of the key scenes in Platoon), but the end result is absolutely pure John Williams. Rather than accompanying the drama, the music seems to offer a thoughtful commentary on what we’re seeing on screen, sometimes recalling a modus operandi more akin to European film composers like Ennio Morricone — the score aches, suffers and at the end even rejoices in response of the events depicted on screen, therefore becoming a haunting presence, almost like a Greek chorus. Williams’s music talks about Kovic’s struggle and the pain of a whole country during troubled times, but also offering a glimpse of hope about the chance of a new beginning and the restoration of values at the core of democracy for which Ron Kovic keeps fighting.

The concert suite prepared by Williams after the film’s release contains virtually all the principal thematic subjects of the score — an arresting trumpet call opens the piece as a prologue with a strong powerful statement, after which the full string section enters presenting the intense theme associated with Ron Kovic, developed over a series of redolent but hopeful variations. The solo trumpet returns, this time presenting an exquisite, Copland-esque thematic subject played with warmth and serenity, taking us directly into the final development section with tutti strings over a jagged rhythmic accompaniment. After a powerful crescendo, the opening trumpet call returns, from which a brief ruminative cadenza is developed and then slowly brings the piece to a quiet and mournful conclusion.

It’s a splendid summary of the main virtues of this great score, perhaps less known than other iconic film works from Williams’s repertoire, but nonetheless emotionally powerful and satisfying. The recording presented here is performed by Tim Morrison and the Boston Pops Orchestra conducted by Williams.

On January 28, composer and conductor Eric Whitacre will teach a special online masterclass for @_asmac_ , sharing practical and artistic insights gained over more than thirty years creating music. Eric will dive into the Emotional Architecture that’s written into the music for the listener and performer, with opportunity for a Q&A.
🔴 JOHN WILLIAMS GETS 53rd OSCAR NOMINATION FOR 'THE FABELMANS'
🔴 NEW EPISODE!🎙
COMING SOON on The Legacy of John Williams podcast!🎙
"From my point of view, I have absolute trust and faith that John Williams is right when he sees my movie for the first time, which I have already seen dozens of times. John's first impressions of my films are the ones I listen to, and then I get to hear how much he loves the movie because he musically enhances it and takes it to an entire different level. That's what I think music does for a movie." — Steven Spielberg
STEVEN SPIELBERG AT WORK ON A DOCUMENTARY ON JOHN WILLIAMS 🎥